Laos is the most heavily bombed country of human history.
From 1964 to 1973 the U.S. Air Force dropped the amount of 270 million cluster bombs on the region – an average of one every 8 minutes – as part of a long military operation that was kept secret until 1991. Even today there are various types of bombs scattered everywhere in Laotian territory: underground, hidden among the vegetation but also exposed on the streets, shops, ready to be sold and recycled.
For many Laotians, the bombs found have become a resource. In some remote villages bombs are used as pillars for houses while others villages base their business on the creation of everyday objects such as spoons, bracelets and pots, obtained from the recycling of bombs, missiles and even American B52 aircrafts, which have become fast canoes used to go fishing. Laotians have spent about 20 years trying to escape the bombing, taking refuge in dozens of caves where they’ve built schools and hospitals. Laotians usually consider those caves as places with a strong presence of negative spirits belonging to the souls of their compatriots who died in a brutal way. For this reason they are afraid to enter those caves. According to the National Regulatory Authority for unexploded ordnance, 30% of these bombs have remained unexploded causing 50,000 victims; 20,000 since the end of the war. This deadly legacy continues today to threaten the lives of thousands of communities in Laos. They still find themselves surrounded by unexploded ordnance: it will take about 150 years to reclaim the entire territory. UXO Lao – Lao National Unexploded Ordnance Program – with the help MAG – an international NGO – constantly operate in teams to clear community land from unexploded bombs. 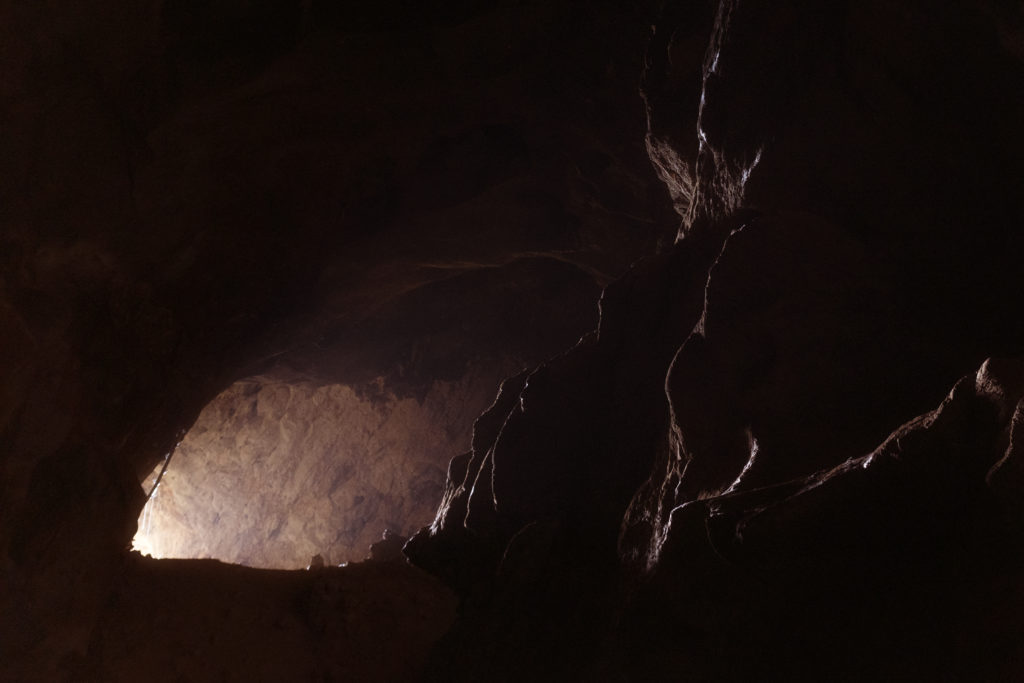 Tan Piu cave, Laos. On November 24, 1968, a missile launched by an American aircraft hit the entrance of the cave in full, resulting in the death of 374 Laotian civilians. The cave is about 100 meters long, some died from the explosion, others from the collapse of part of the rock and those who were at the bottom because of the fumes. The Laotians are still afraid to enter it today due to the presence of the spirits of the dead who died of violent causes. Tan Piu cave, Laos. 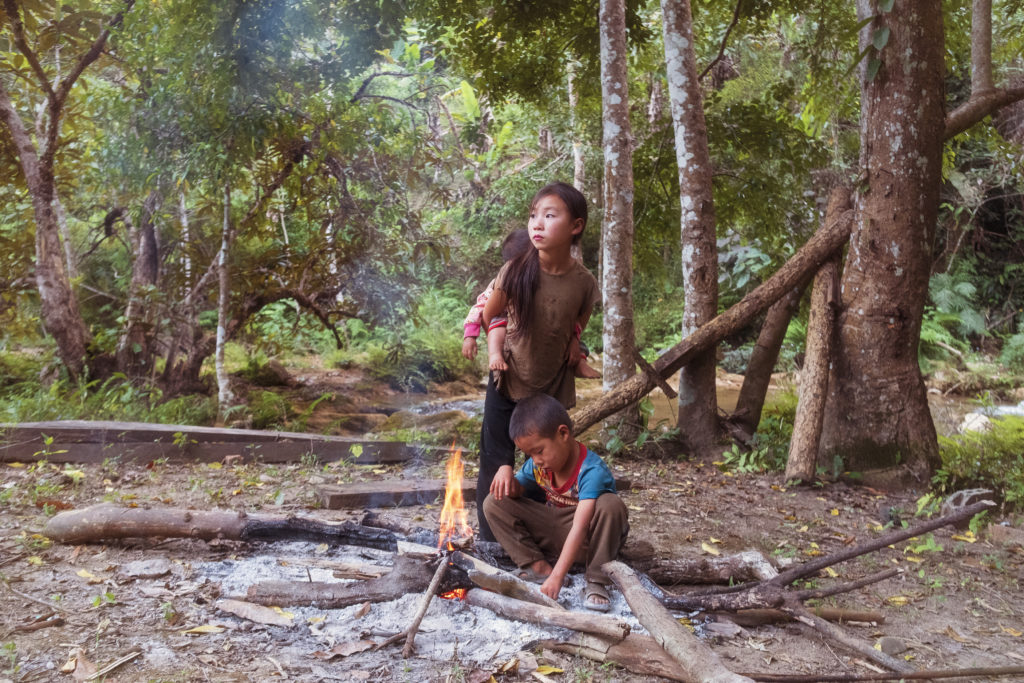 Three children in a forest near Ban Tha Jok village are heating with fire while his father went up the mountain to stock up on fruit with his eldest son. Lighting fires in the woods for cooking or warm up is a very common practice among Laotians, but it is very dangerous because the heat can detonate a bomb that lies under the ground. According to the Uxo Lao Association, this is among the main causes of injury or death. Xieng Kuang province. 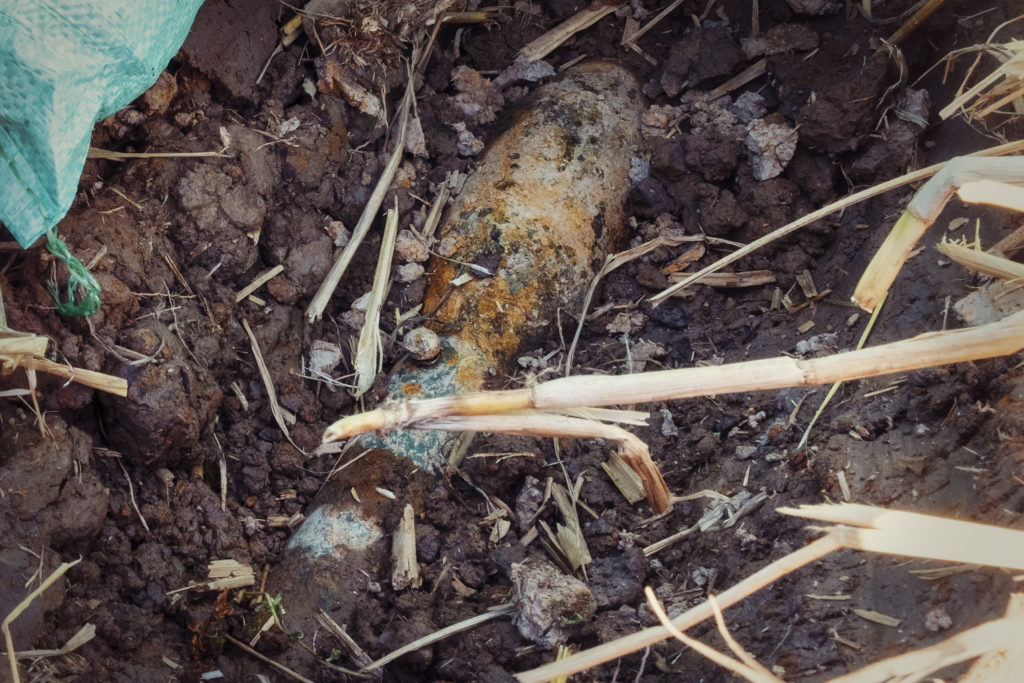 An UXO - unexploded ordinance mortar discovered by a girl from the Mag team with the metal detector. The bomb will be blown up on the spot shortly. Xieng Kuang. Laos. 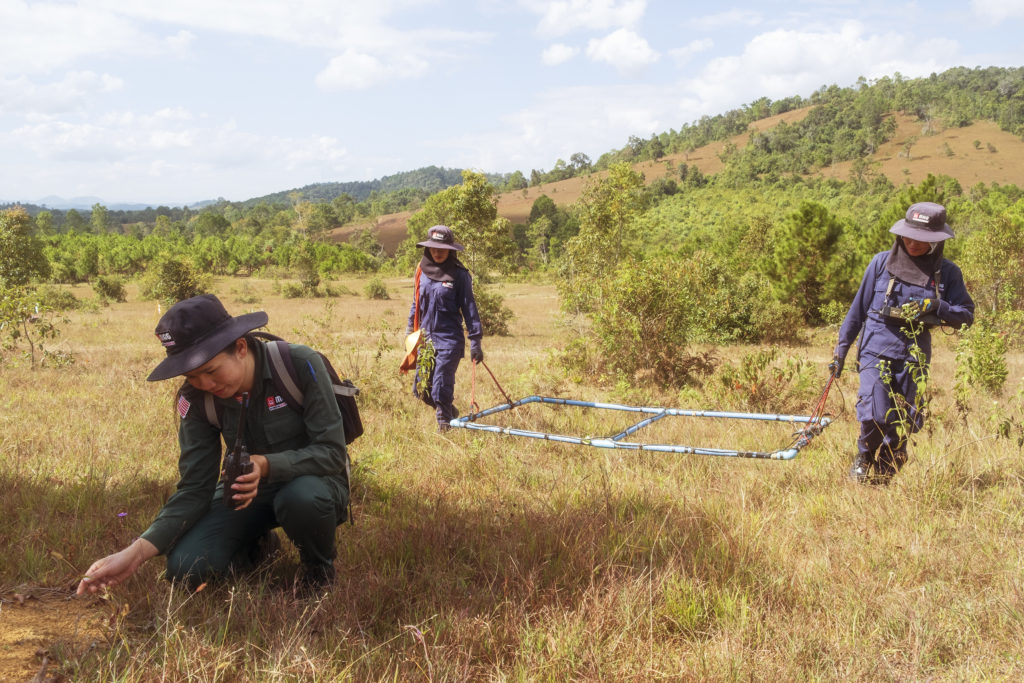 All female team from ONG MAG at work with metal detector. At the end of the day they have discovered 19 metal fragments of bombs, one unexploited cluster bomb and one mortar shot. Xieng kuang province. 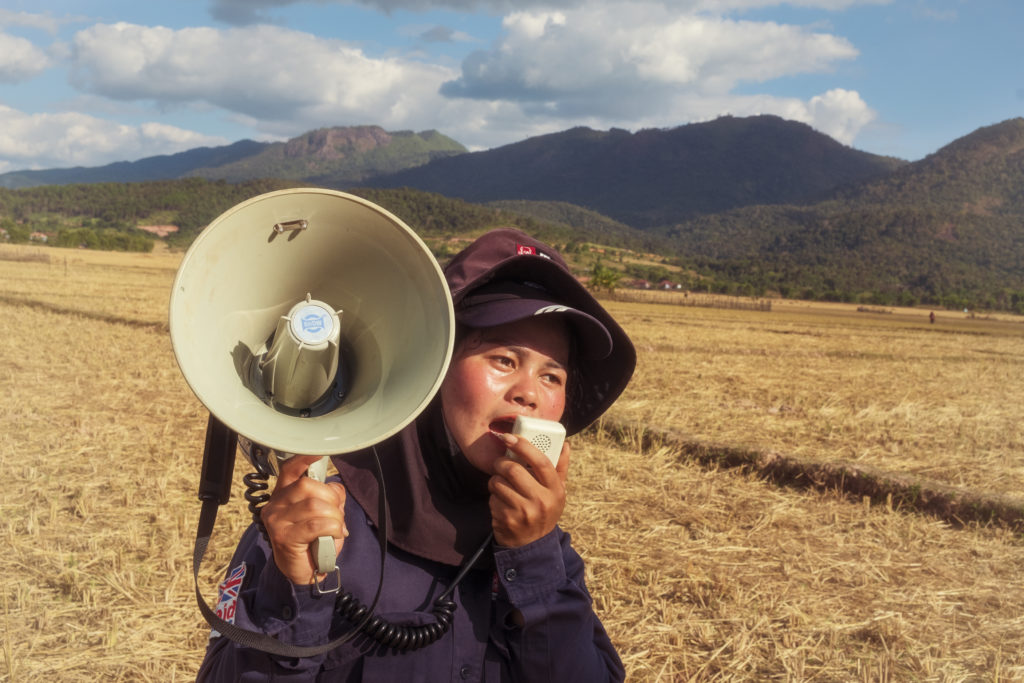 The leader of the all female team of the NGO M.A.G. intimate the whole population to stay in their homes because nearby they discovered a large unexploded ordnance which they will soon detonate. Ban Ho Khang. Xien Khoung province, Laos 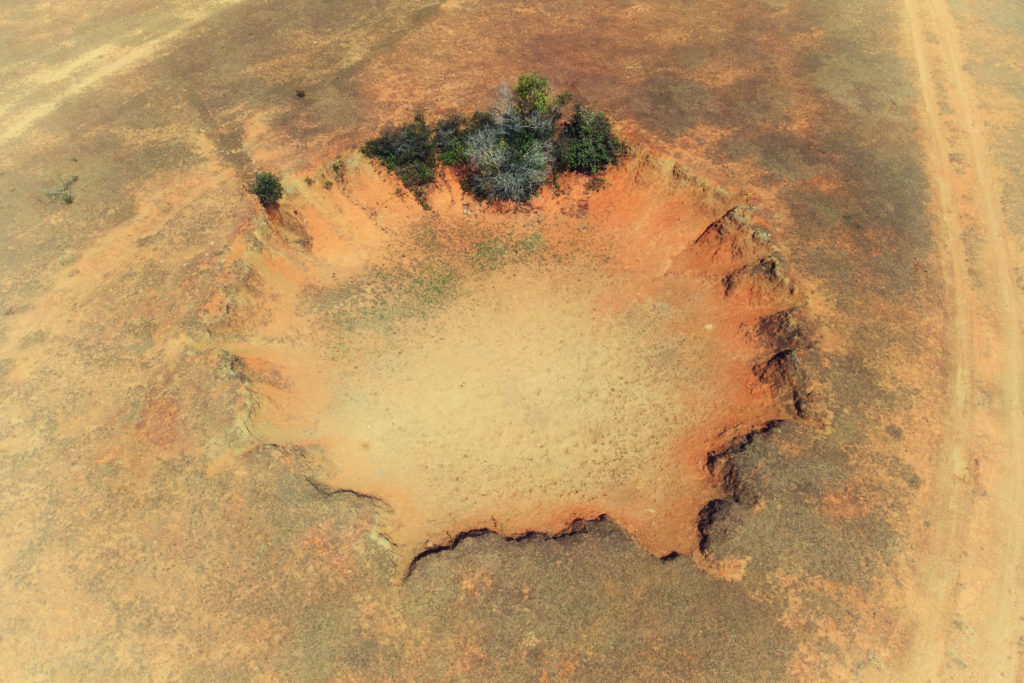 A crater caused by an aerial bombing in a territory 30 km from Phonsavan where for this reason the vegetation no longer grows and it is no longer possible to cultivate. Xieng Khuang area was repeatedly bombed by North American b52s who were unable to find Pathet Lao's hiding places. 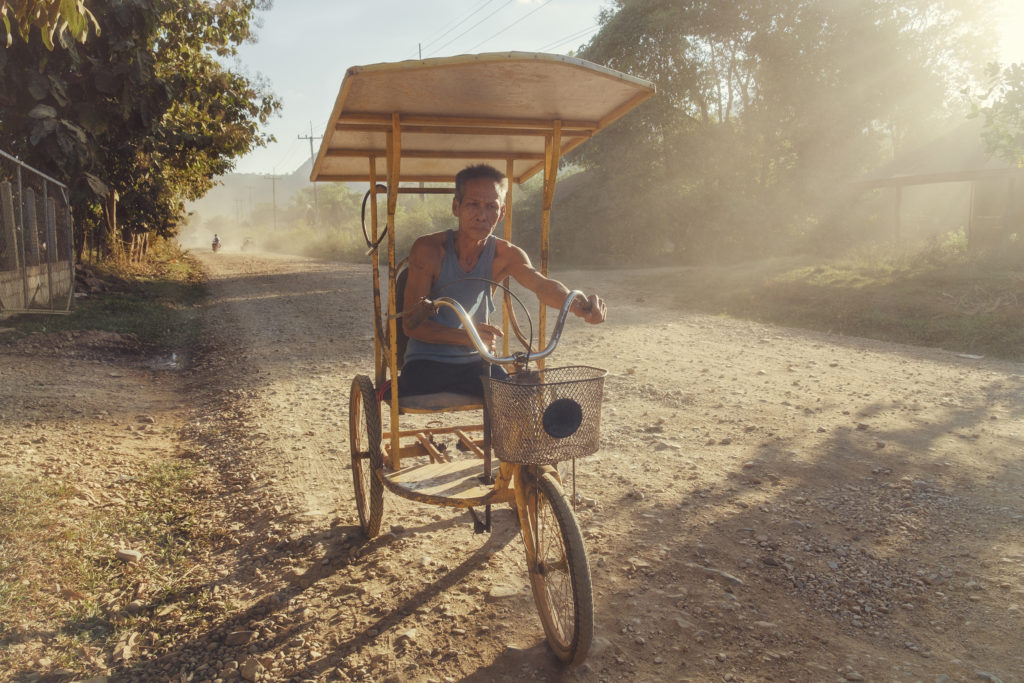 Loe Thammavong, 54, was left legless because of an unexploded bomb in the woods near his village. Here he drives a means of locomotion built specifically for him. 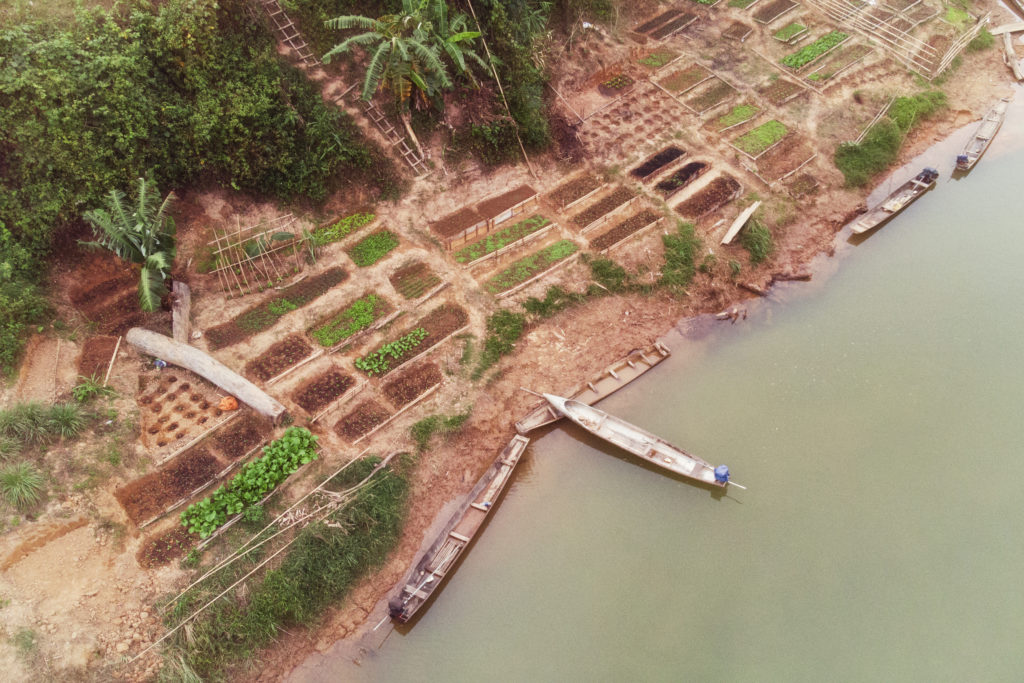 Canoes made by vilagers with tanks of American B52 aircrafts crashed in the area during the Secret War. Tha Bak village. Laos 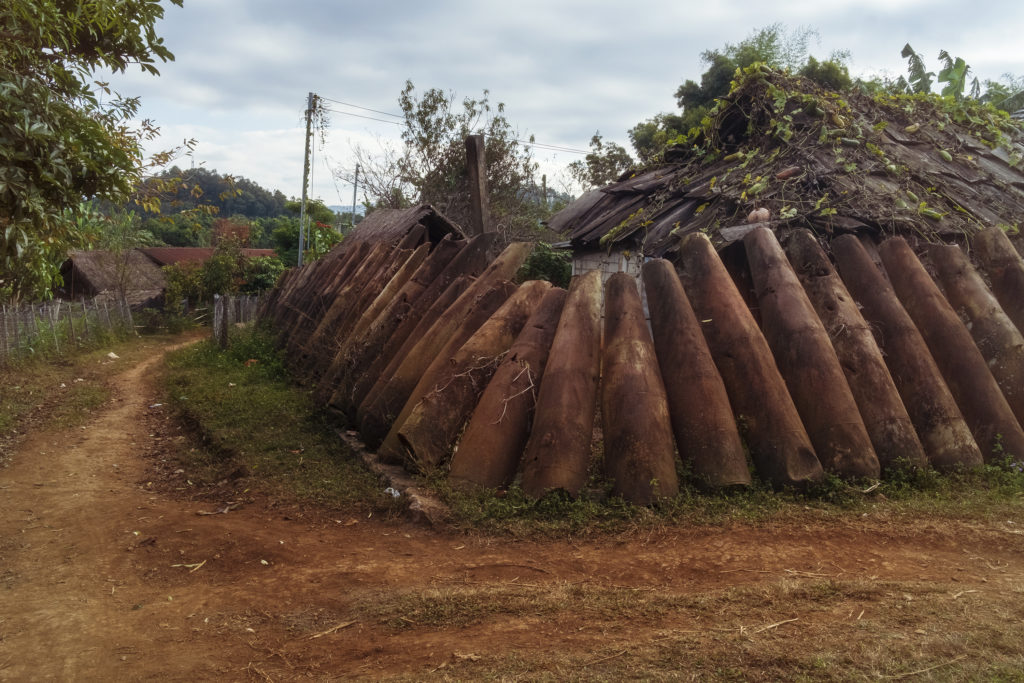 Cluster bombs dropped by U.S. army force during the secret war in Laos, piled up like a fence in a house in the village of Ban Tha Jok. This Hmong village has recycled old war junk into practical objects, hence the nickname 'Bomb Village'. 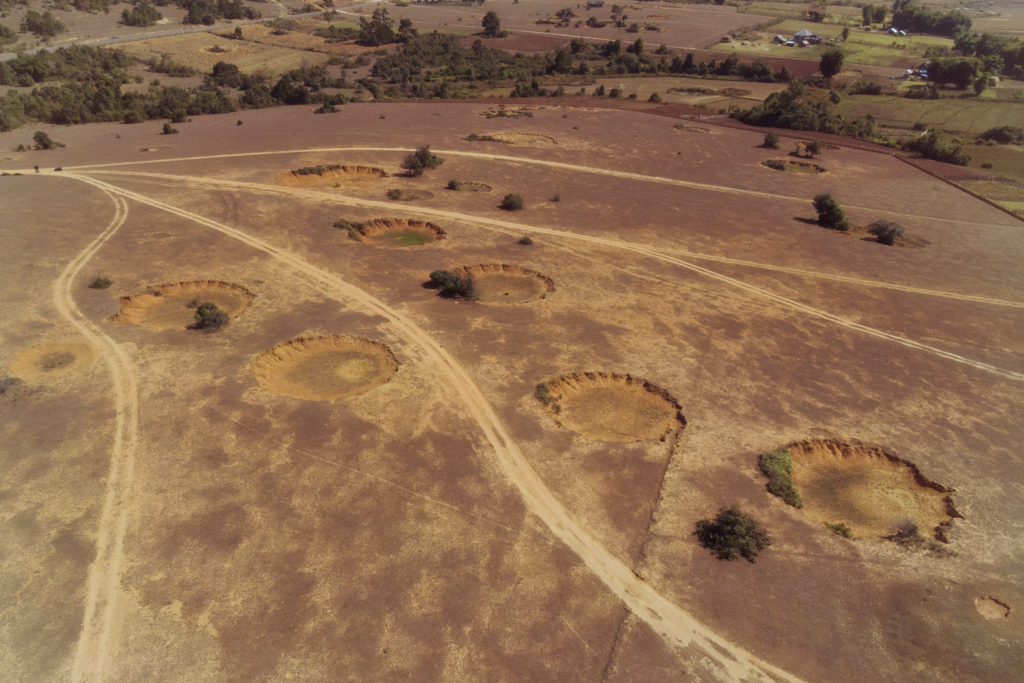 Crater caused by an aerial bombing in a territory 30 km from Phonsavan where for this reason the vegetation no longer grows and it is no longer possible to cultivate. Xieng Khuang area was repeatedly bombed by North American b52s who were unable to find Pathet Lao's hiding places. 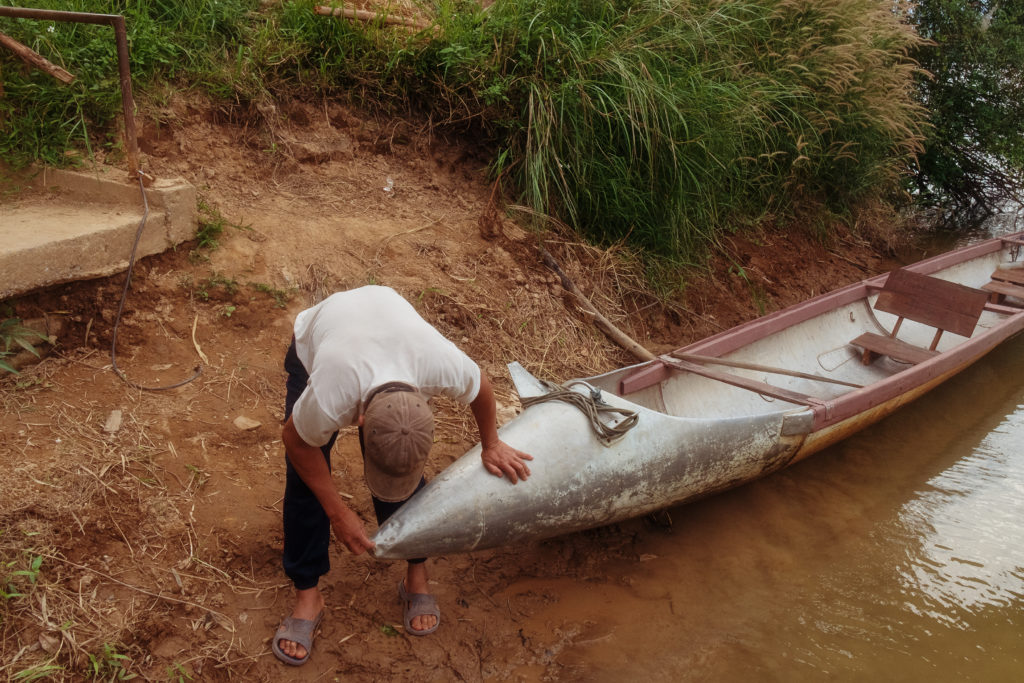 Kong Siphandone, fisherman, is checking his boat built by him with a tank of an American B52 warplane crashed during the secret war in Laos (1964 - 1973). This boat was built by his father. Ta Bak village. 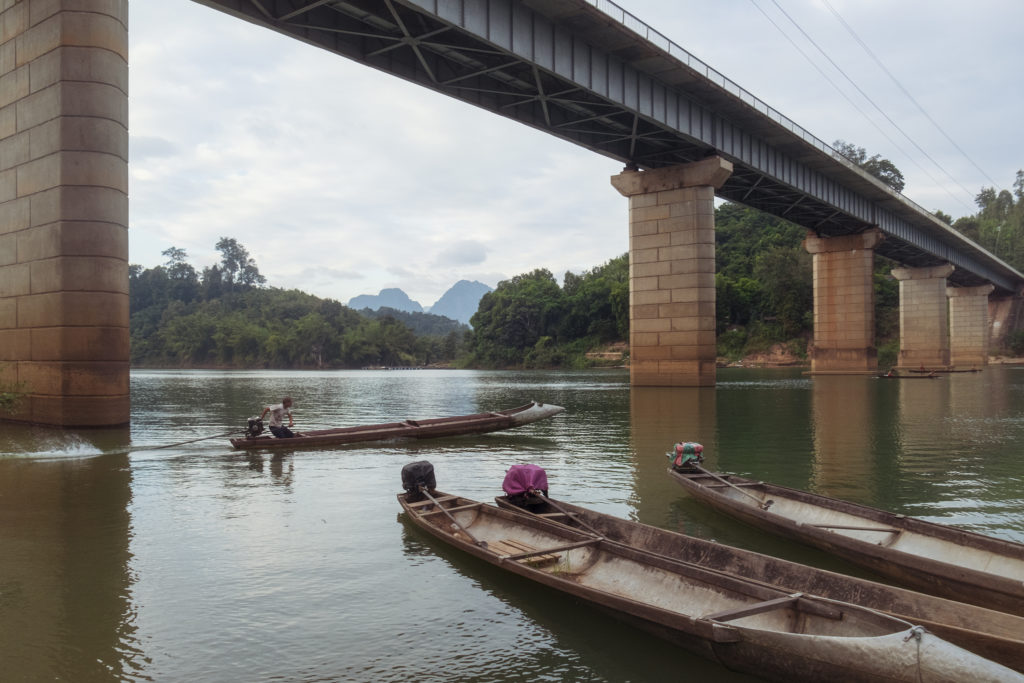 Canoes made by vilagers with tanks of American B52 aircrafts crashed in the area during the Secret War. In the village all the fishermen have one. Tha Bak village. 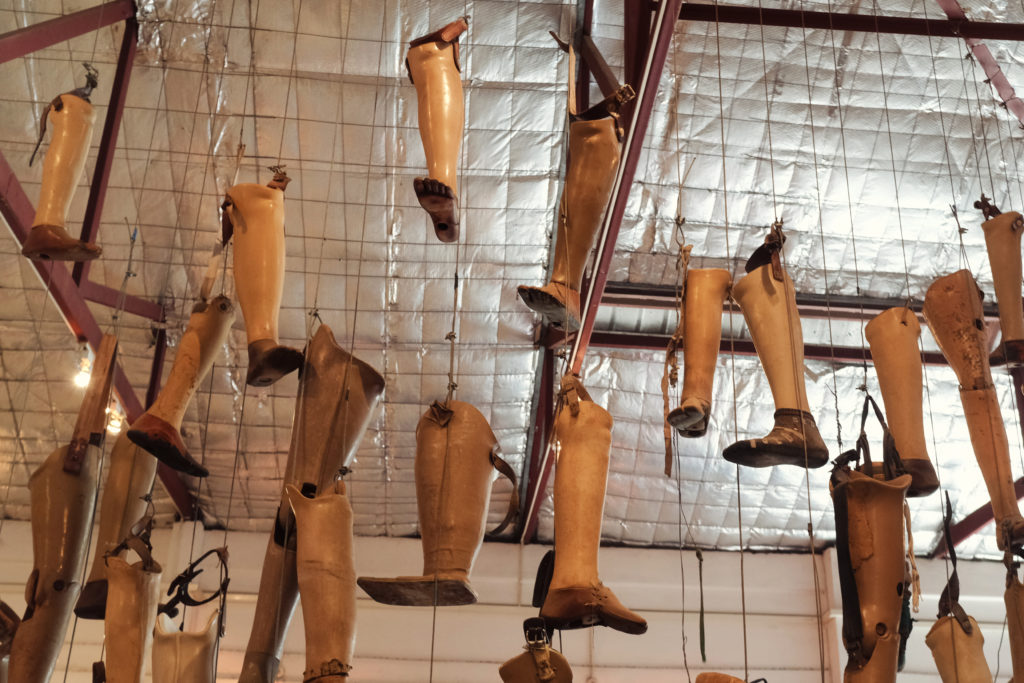 Leg prosthesis exhibited at the COPE Visitor Center in the capital Vientiane. COPE is a non-profit organization in Laos which provides prosthetic limbs, mobility assistance and rehabilitation for Lao people who can afford it. Vientiane, Laos. 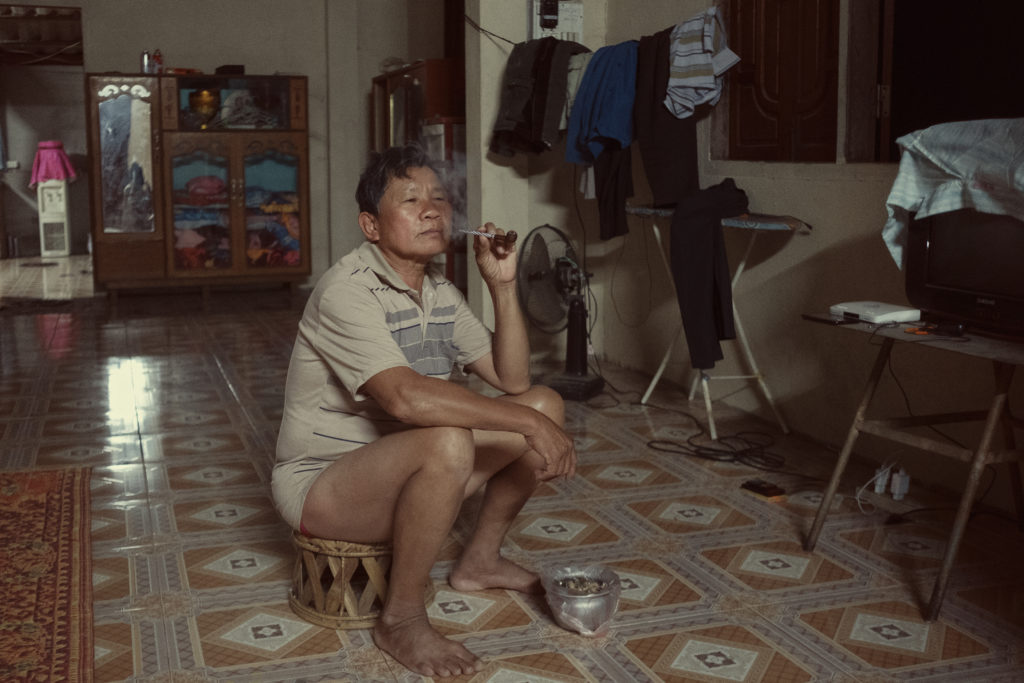 Mr Phar Mayon has a habit of smoking opium at night in his home. The years of war, of bombing, come back to his mind. Tha Bak village. Kammauane region. Laos. 2019 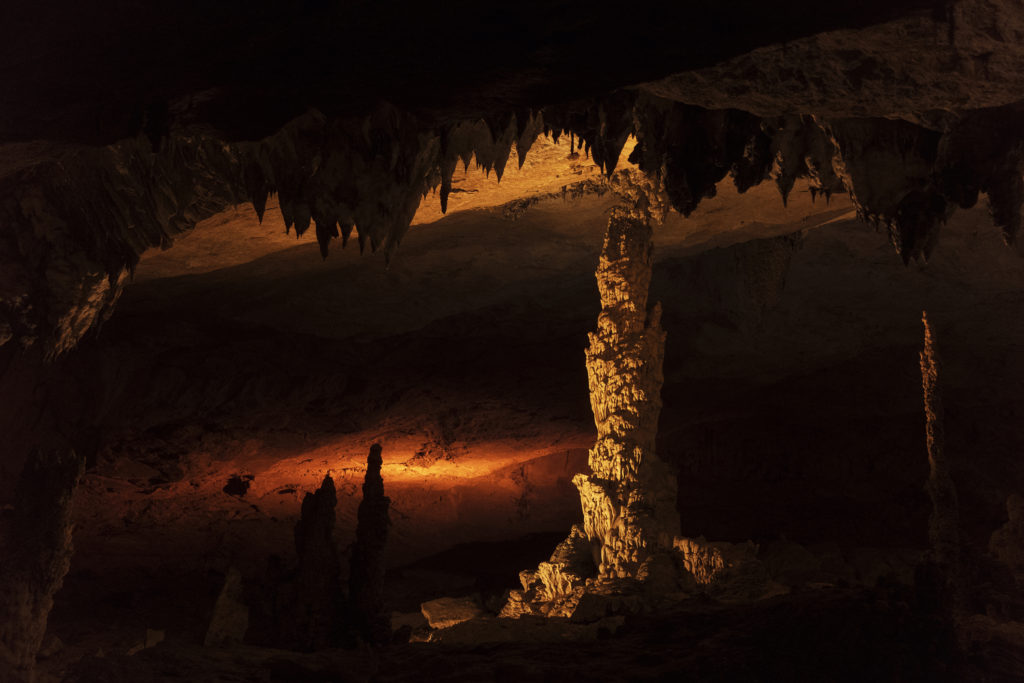 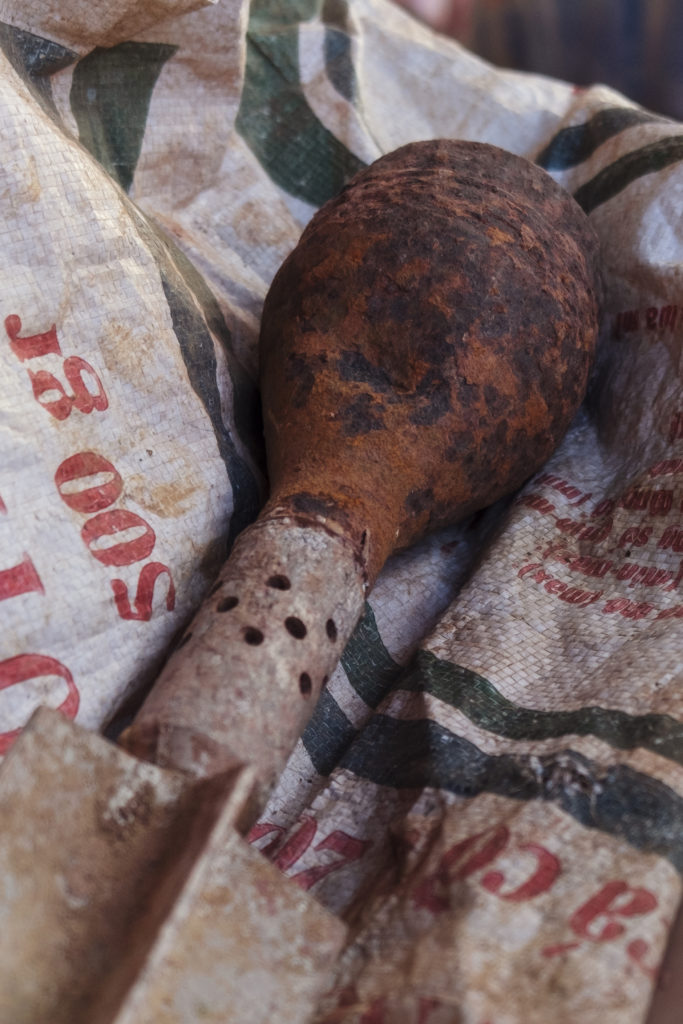 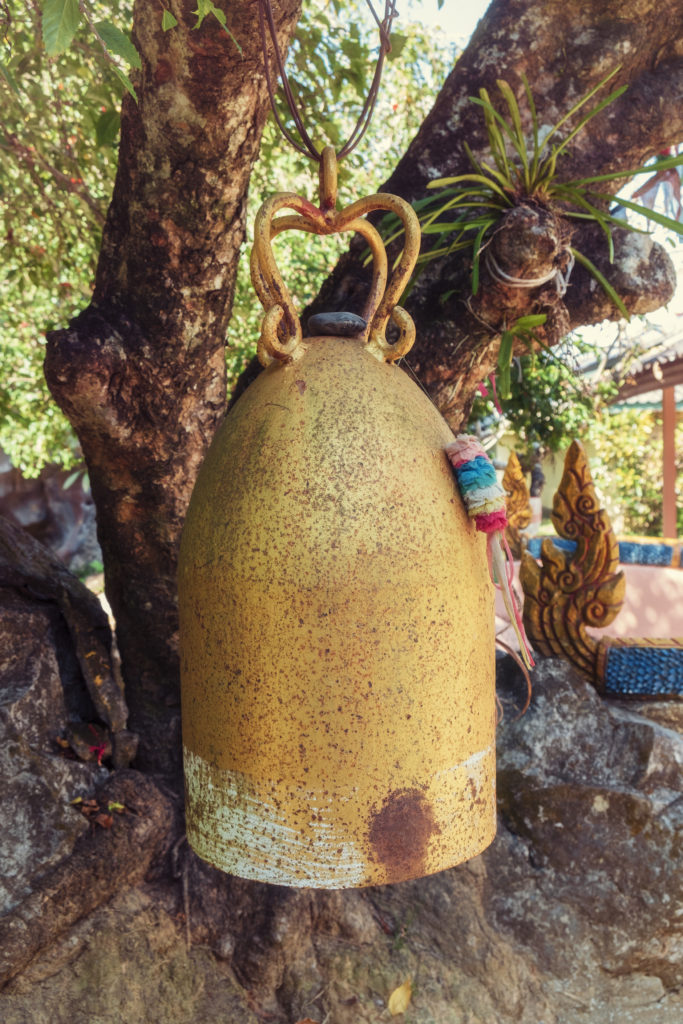 A cluster bomb, dating back to the secret war, transformed into a bell measuring one meter 20cm long and 45cm wide at the entrance to the Tam Chang temple. Vang Vieng area, Laos. 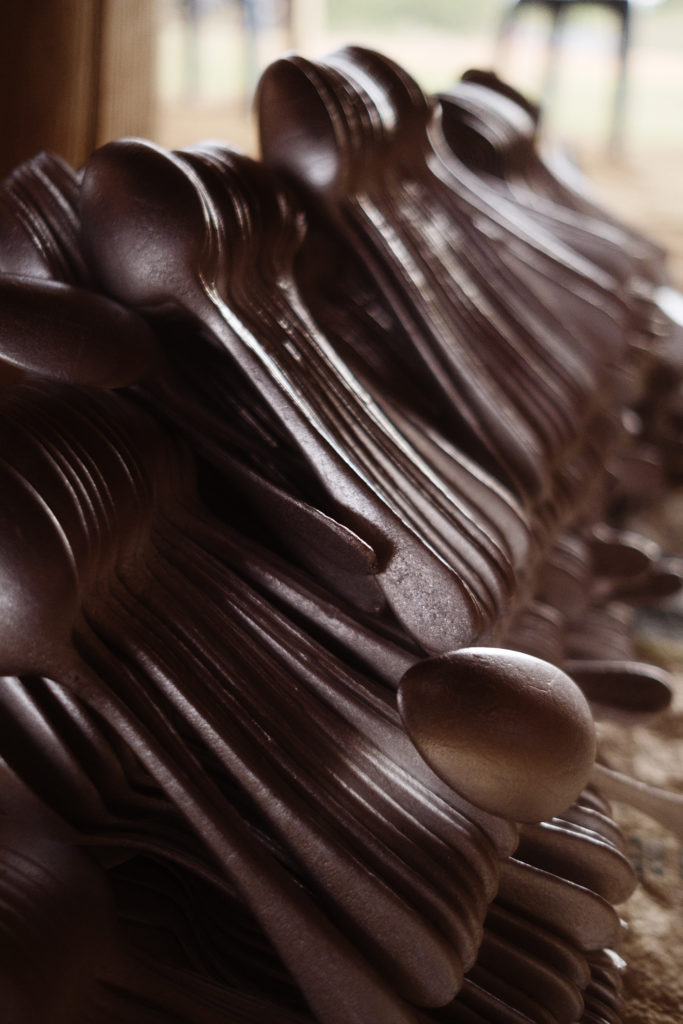 Spoons just made by a family-run laboratory with recycled bombs and missiles. In the village a large part of the economy is based on the creation of objects from the recycling of bombs. Ban Napia. Laos 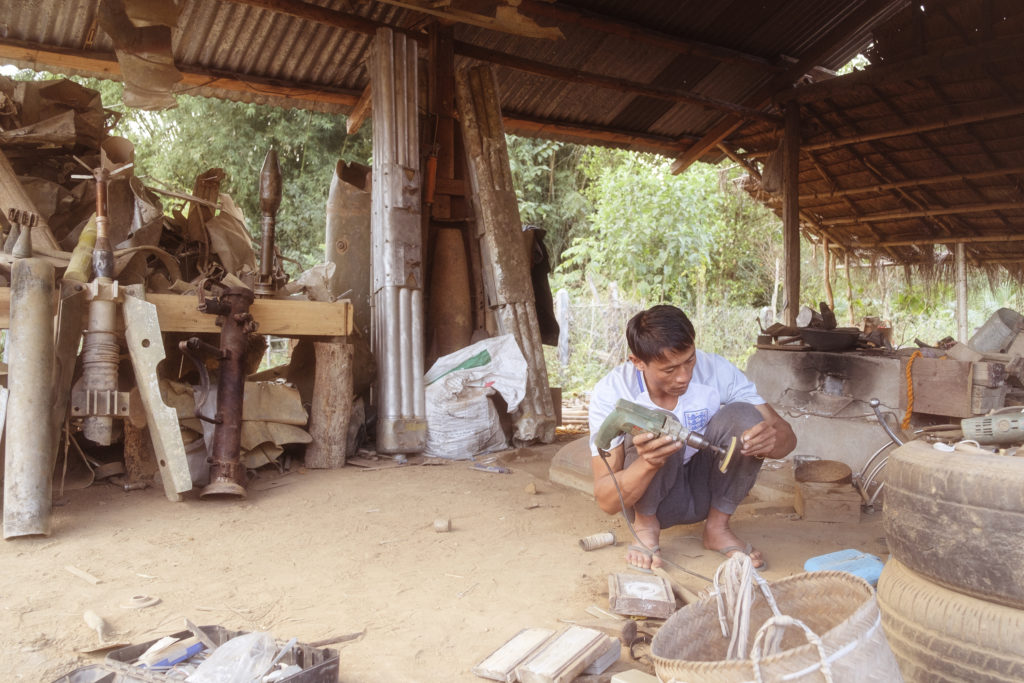 Somechit Phuang Savat 36, in his workshop where he works. He melts the metals of the bombs and makes rings, earrings, bracelets that he sells to an American company. Behind him various types of weapons: mortars, missiles, mines, grenades and wreckage of military aircraft. Ban Napia village. 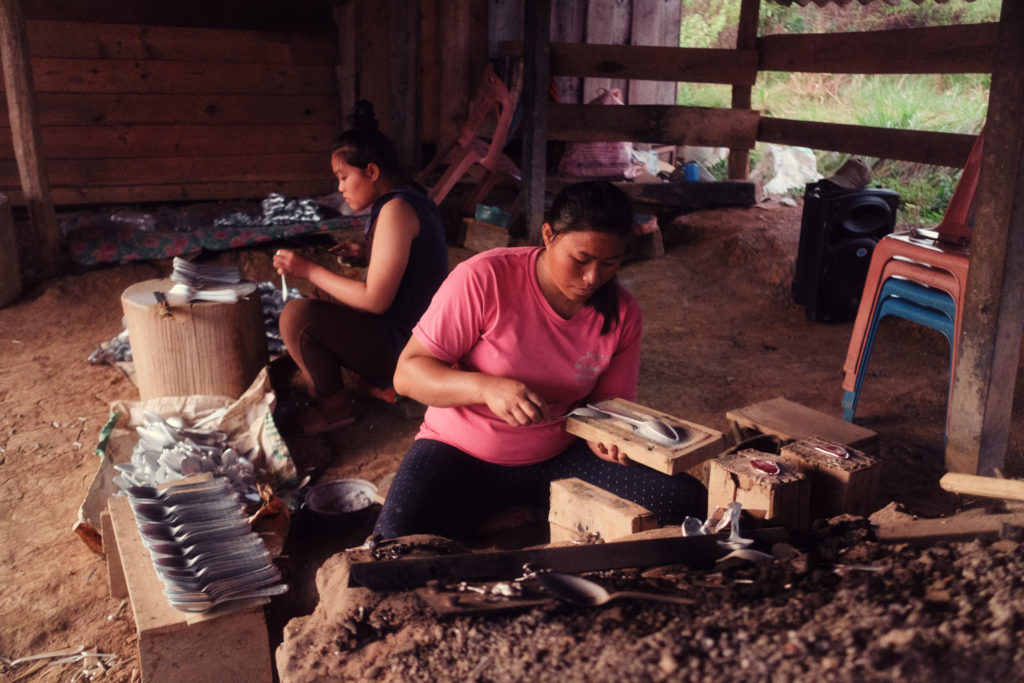 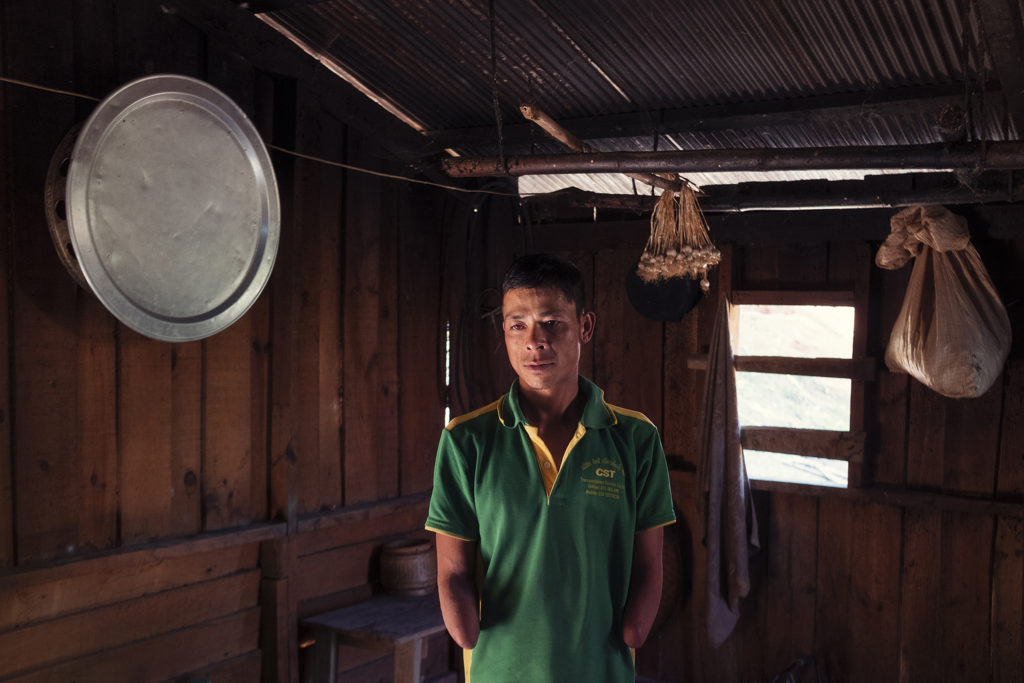 Kee Soymani, 30, in his home. Married and father of two children, at the age of 21 he lost both his hands and forearms because of an unexploded ordnance that exploded on him while he was in the forest looking for bombs to sell metals. Lat Sen village. Laos. 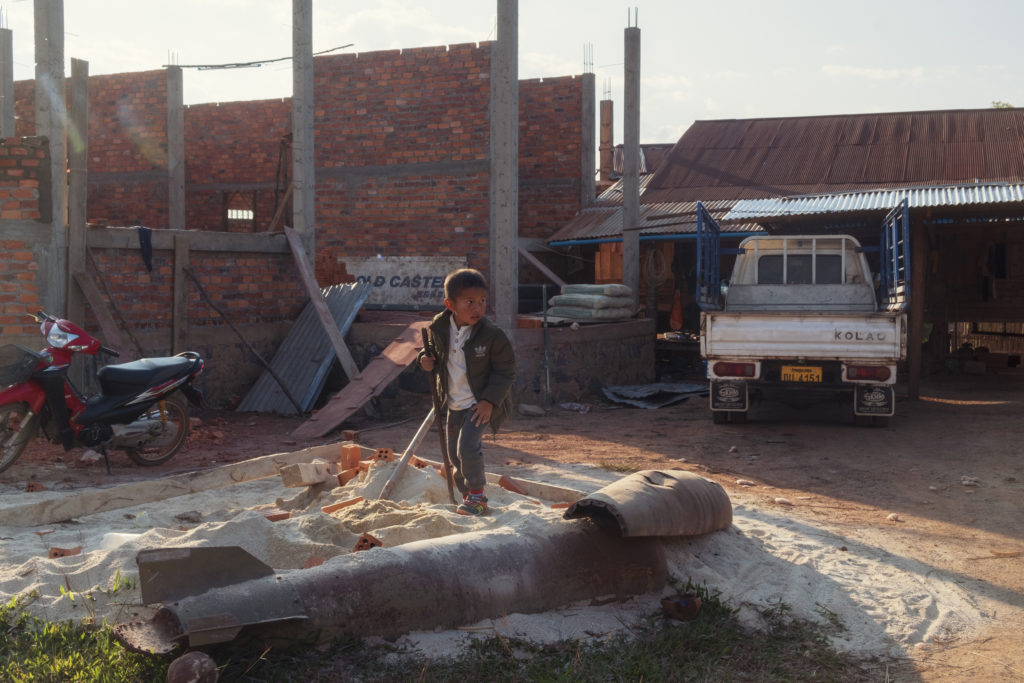 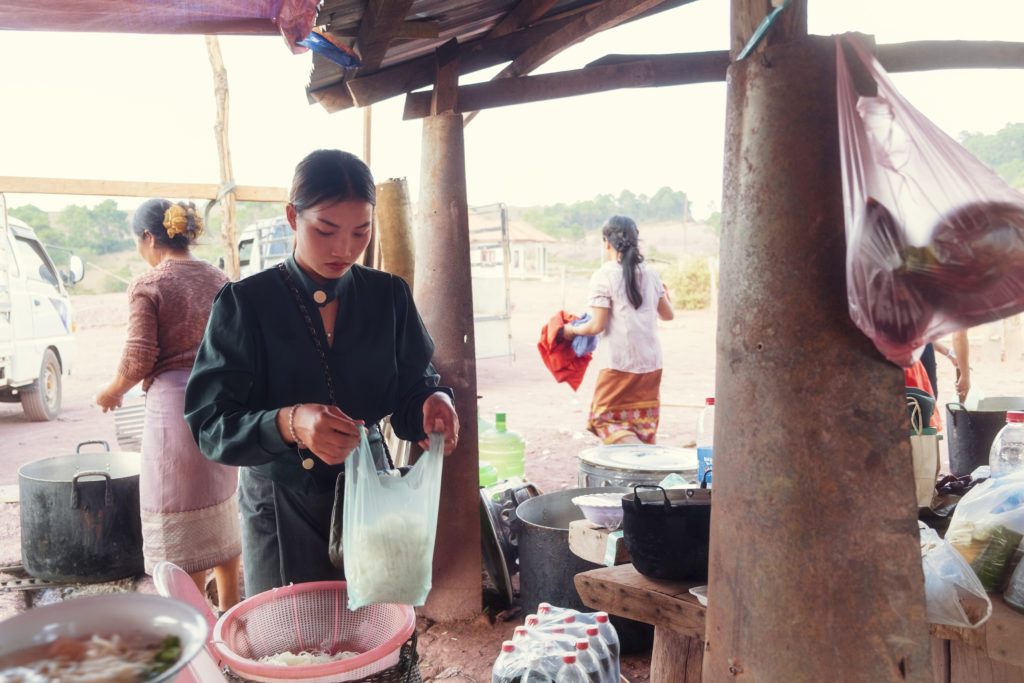 Shopping food in a shop that stands on pillars made from recycled bombs. Ban Napia village. Laos. 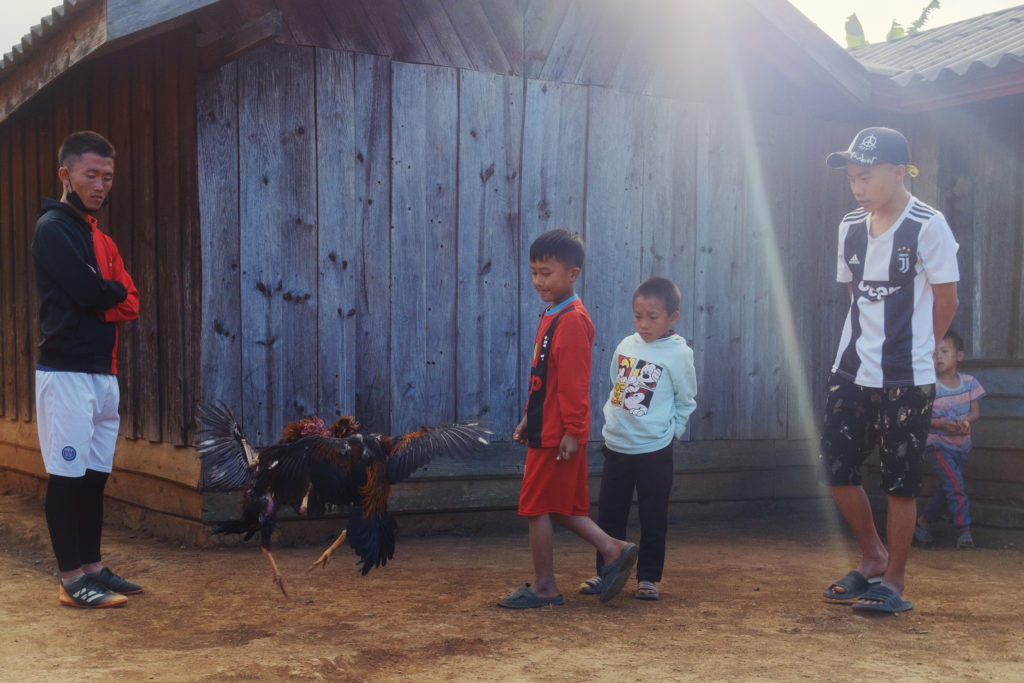 Children and teenagers of the Hmong ethnic group are training their roosters in view of the Hmong lunar new year where they will be used to fight. Tha jok village, known as “Bomb village”. Known as "Bomb village" because of the many bombs found in the surrounding area. Laos. 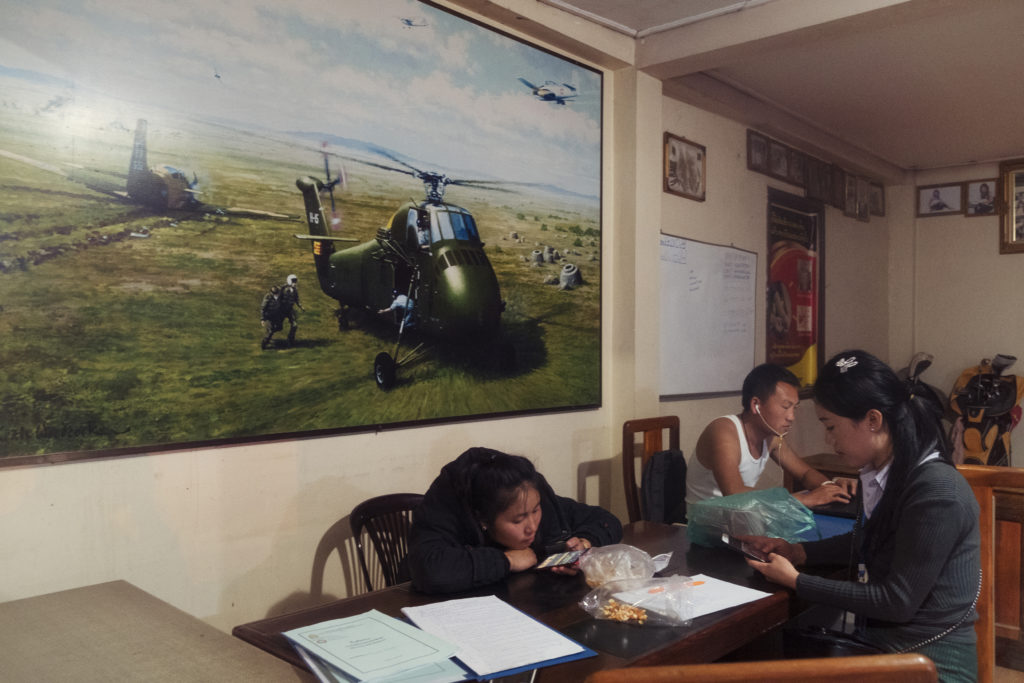 In the reception of a hotel owned by an Hmong family, a picture depicts the American "Huey" helicopter saving lives. Phonsavan city. Xieng Kuang province. 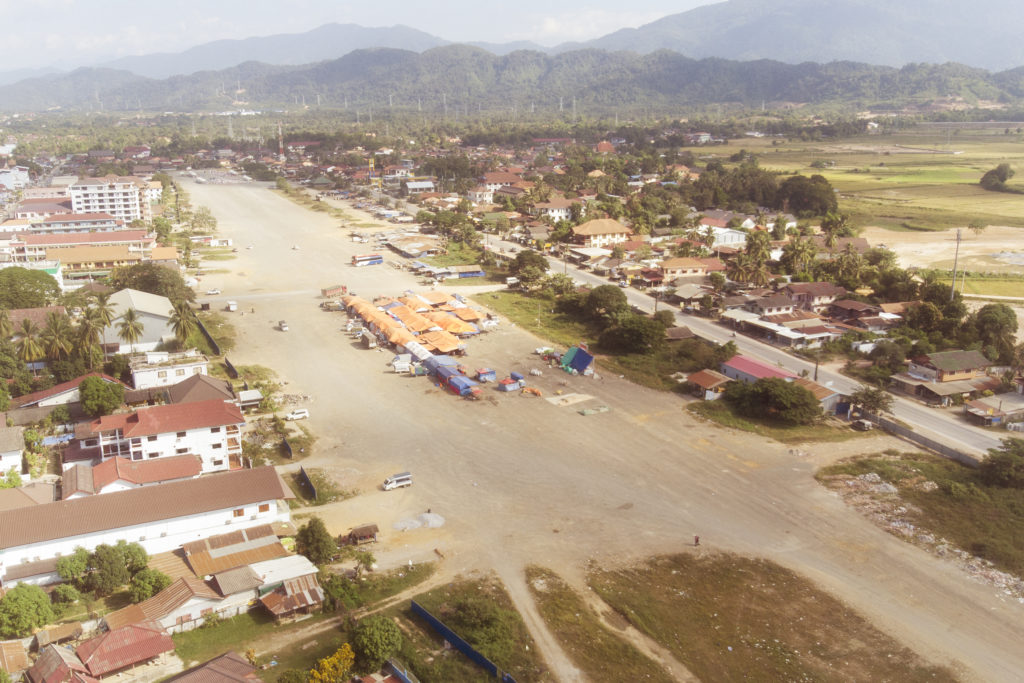 The remains of the secret airport "Lima site 6" used by the CIA for military hundred of missions during the Secret War. Officially it was declared as a civilian mission airport. Only many years after the end of the air raids did the CIA admit that file site 6 was one of the most used airports by the planes leaving towards the Ho Chi Min path and every time they had not been dropped all of them on Laos because they couldn't land loads of bombs. Vang Vieng town. Laos. 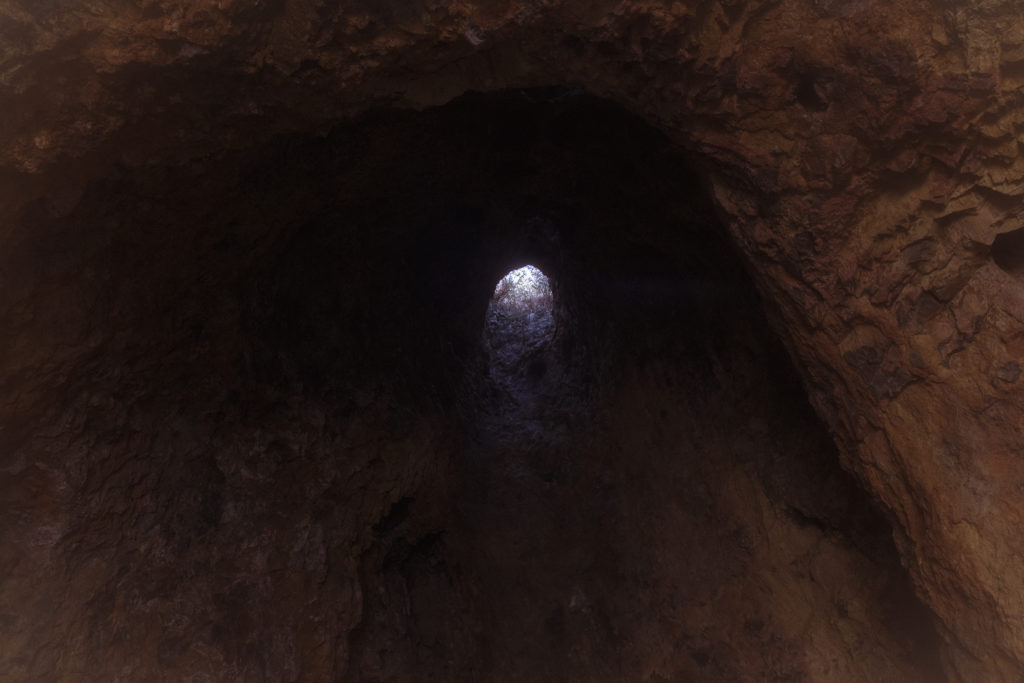 Plan of the Jairs, site one. The hole in a heavily bombed cave. The surrounding area, including the city of Xieng Kuang (currently Phonsavan) was completely razed by aerial bombing. This cave was the only refuge for the entire population. The holes in the cave symbolize the first step towards heaven. For this reason all the relatives of the victims come to this cave and light a candle or leave a tribute to their dead loved ones just outside here. 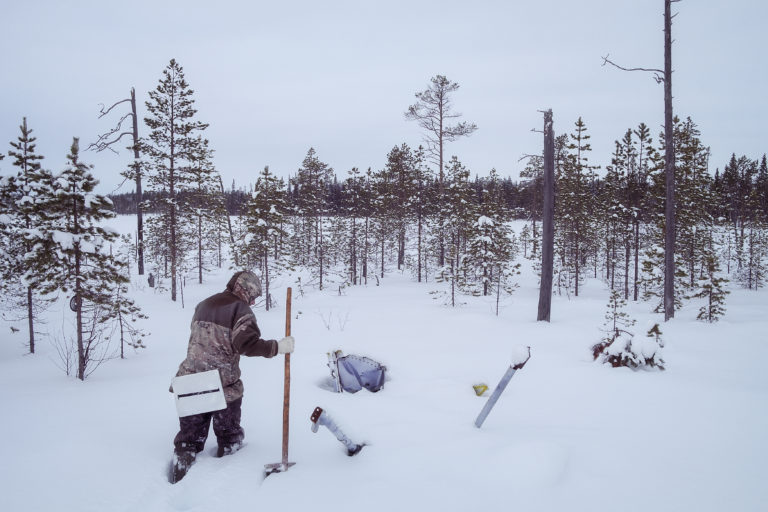 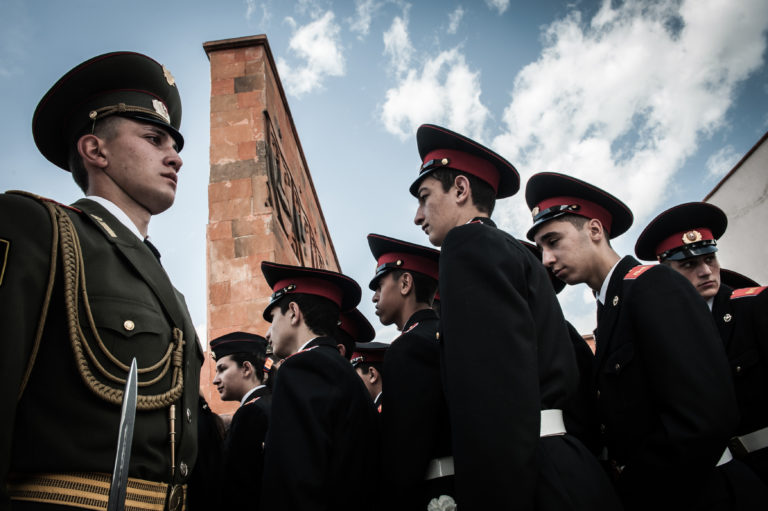 The Forgotten War of Nagorno Karabakh 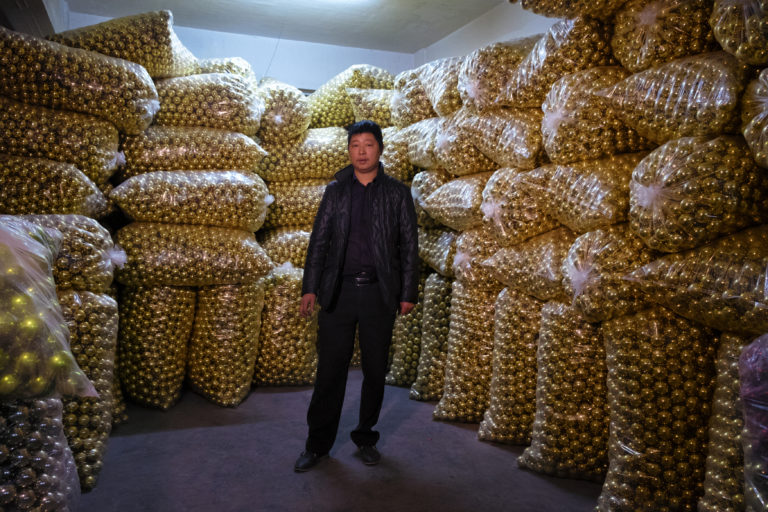 SAVE & ACCEPT
You cannot copy content of this page