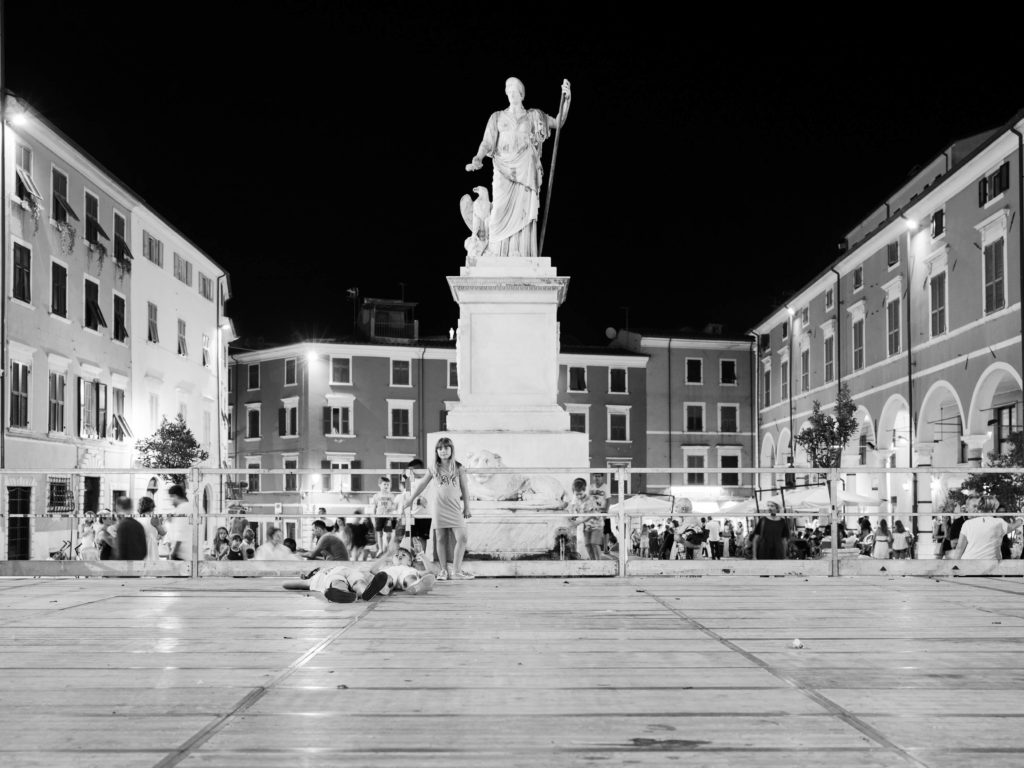 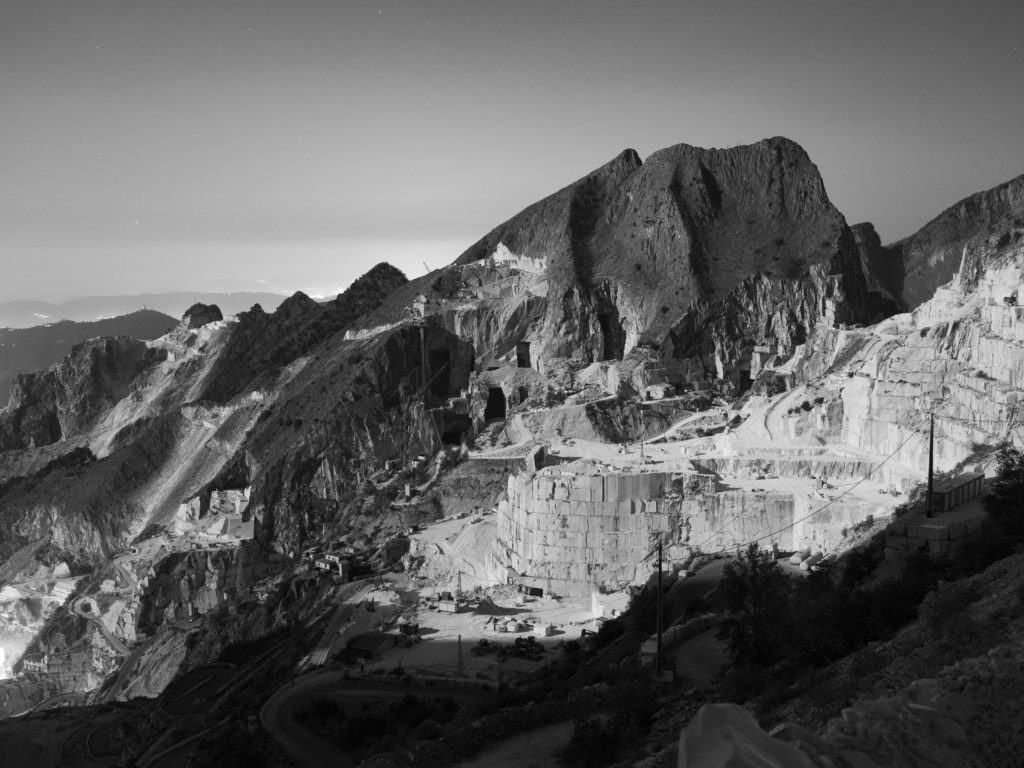 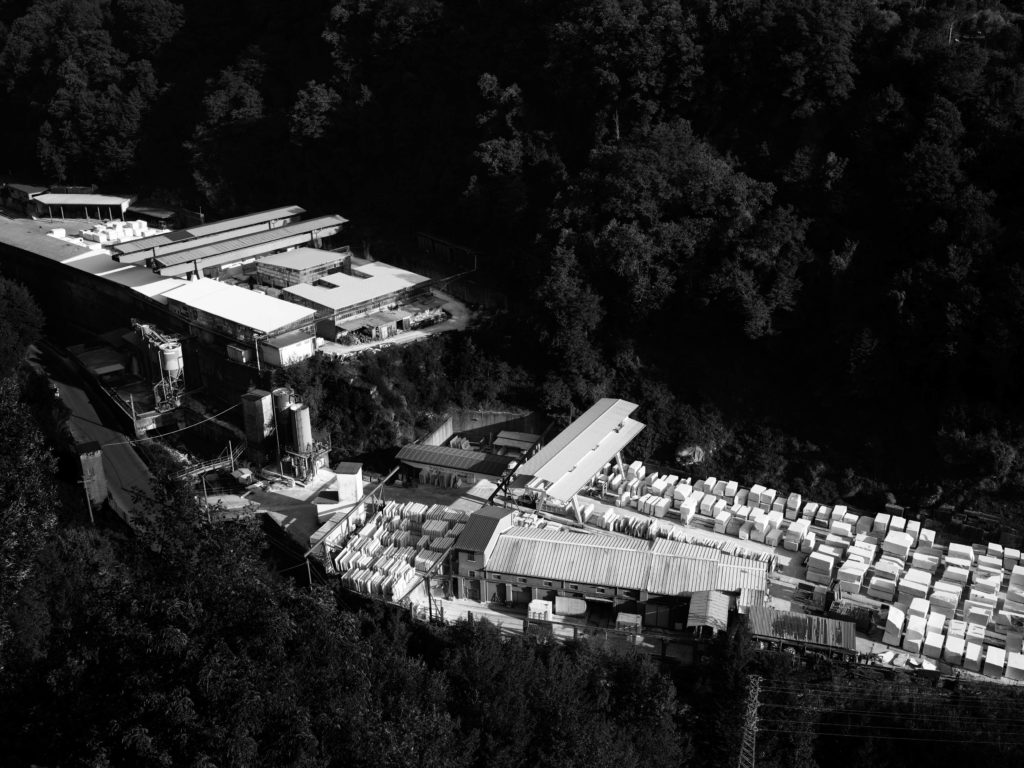 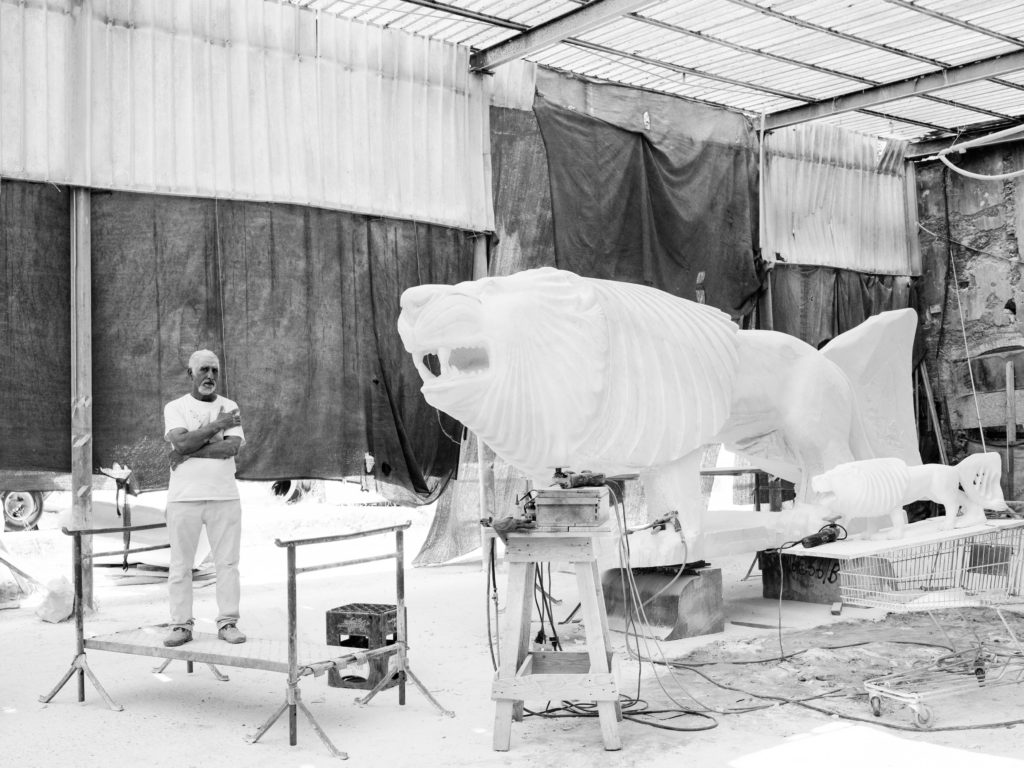 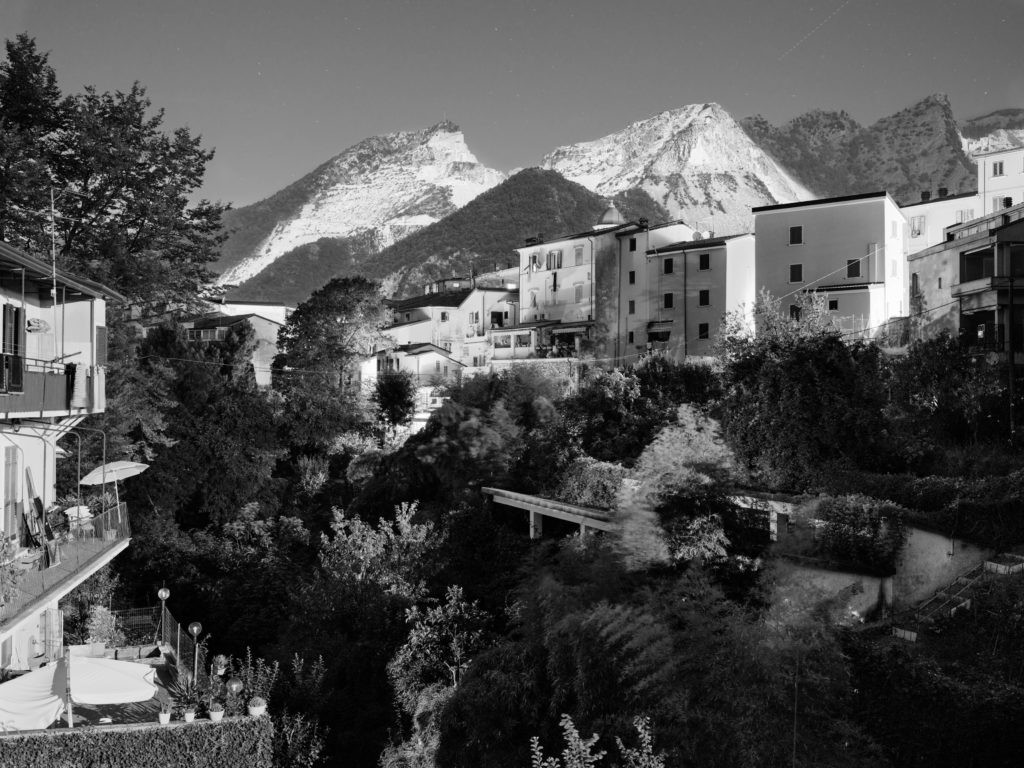 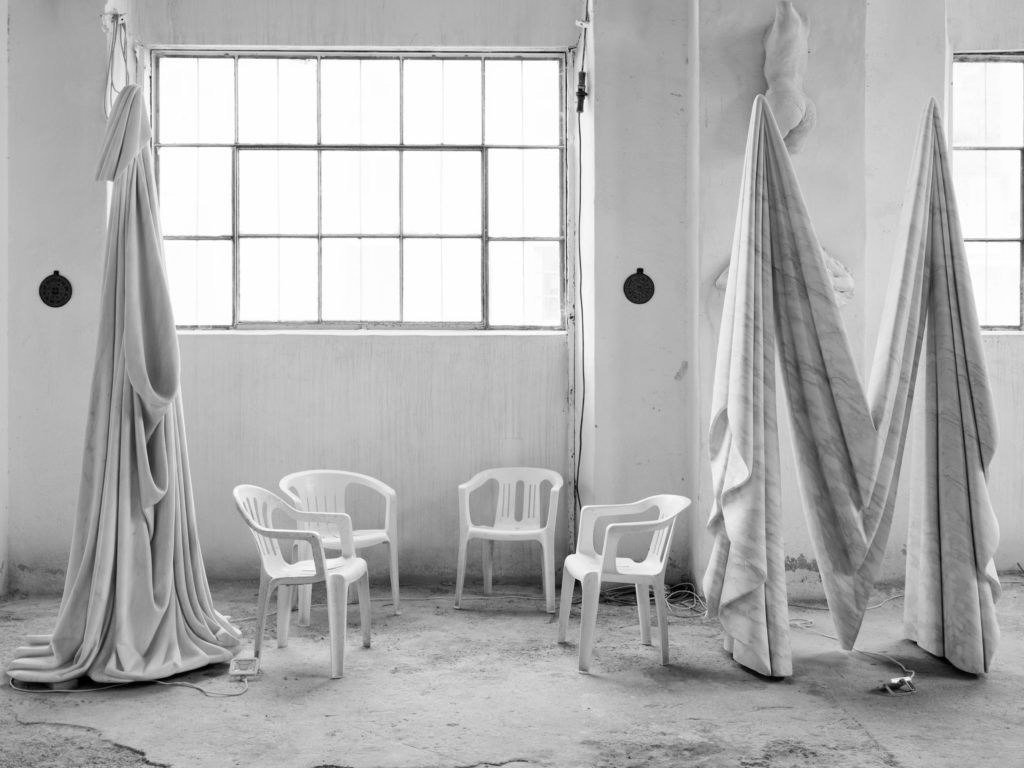 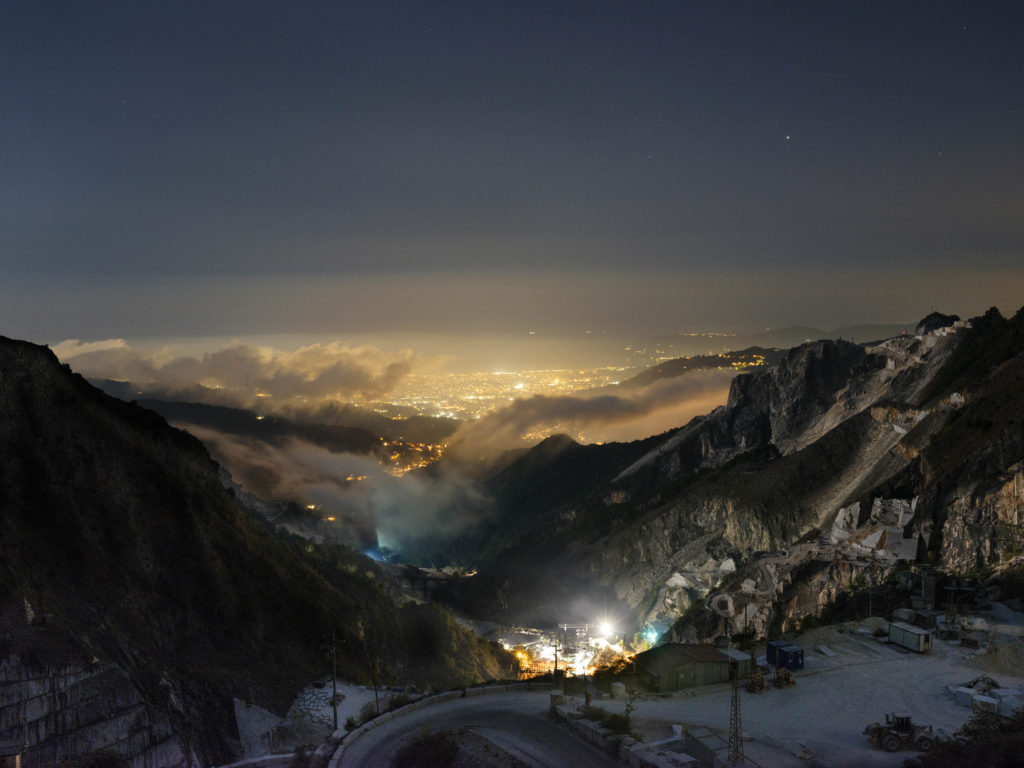 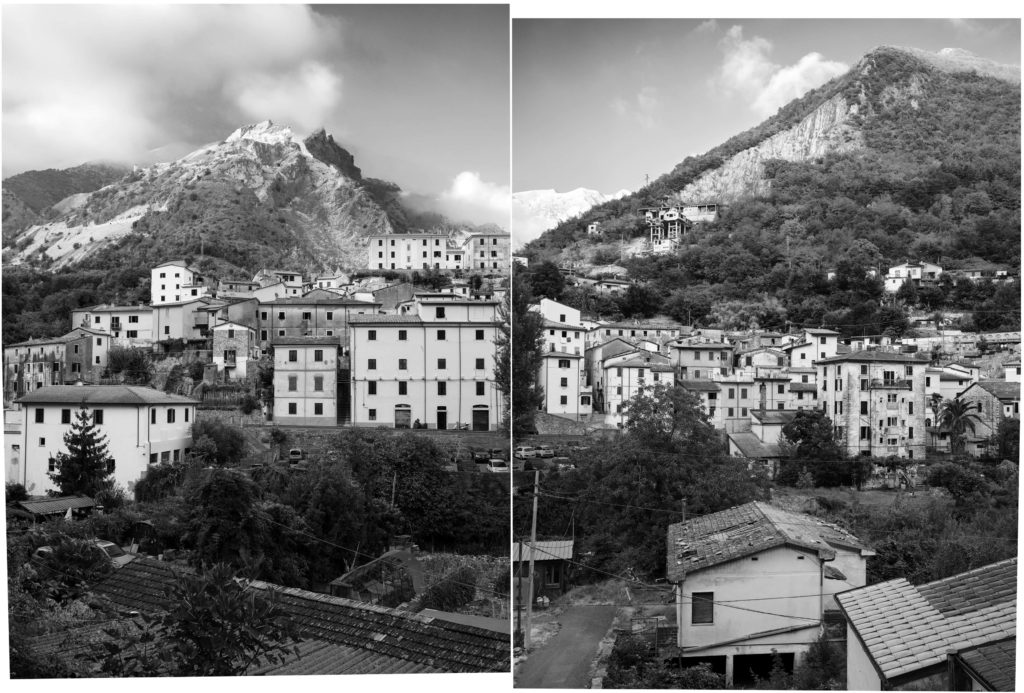 Carrara is a small city of 60 thousand people in the north of Tuscany, between the Mediterranean sea and the Apuan Alps. Its name is worldwide known for one expensive and prestigious raw material: the white marble. Above it, more than 200 marble quarries are distributed in 400 square km, divided in three big basins with ridges that raise up to 2000 meters: Torano, Colonnata and Fantiscritti. This is the most productive area in the world with 1 billion tons of white marble mined per year.

Marble has been extracted in this valley for more than two thousand years. It has been used to build notable monuments and buildings in Italy and all over the world, from ancient Rome and Michelangelo’s sculptures to more recently the Marble Arch in London and the Akshardham in Delhi.

Up to the last century Carrara was flourishing. One hundred years ago the city was the heart of marble carving and could claim a famous academy for sculptors. It was one of the first cities in Europe to have electricity, it was rich of industries, services and even wineries for the people employed in the marble business. Following its independent nature, it became the cradle of Italian Anarchism. Then things changed. The privatization of the mountains and the capitalist-globalized context brought in the business many international companies (and the Bin Laden family as well) and moved the manufacturing away from the valley to China and other destinations. The revenues of the quarries stopped to be redistributed in the valley. The number of miners dropped to few thousands due to the use of new machines. Maybe what changed most was the idea of the world and society. Today the old railway and the factories still stand as imposing ruins in the landscape of this run down peripheral city.

While prospects for the future seem to shrink, the past is constantly growing. I came to Carrara thinking of it as a metaphor for the Italian decadence and crumbling of our glorious past. The marble that was used to decorate our cities and to celebrate our power and richness now is shipped to New York City, to the Arab Emirates, to Russia, to China and wherever the power has placed itself. The marble is aggressively removed by these beautiful mountains that have changed dramatically their shape due to human intervention: the people of Carrara live in a white cradle that they are steadily and cruelly destroying until nothing will be left.

But what I found is a crowd of tenacious people. Today anarchism and proudness seem quite forgotten, but a soft rebellion, a sense of freedom and even of openness to strangers and diversity seem to spark in the city. Covered of white powder, punk, concerned and passionate people don’t bend their heads: they want stubbornly to sprout and live. Carrara is historical but innovative, strong but soft, solid but tender, italian but international, like its marble. The same marble, that was used to build our religious and political temples, seems to ask to renew our concept of who we are and what we could be in the future. Maybe Carrara, more than a metaphor, is a feeling of hope.

I focused my photographs on night view of the quarries and the portraits of individuals engaged in art making. The words of an italian sculptor, Arturo Martini, come to mind: photography is similar to sculpture, it’s made by a cast of light.